There are many methods of Aquarium Overflows that drain water from an overflow box using standpipes.

Many people don’t know much about an overflow even if it’s on their own tank. While they can seem complicated, even the more complex designs can be understood if you just look at what each pipe is doing.

If you can understand each component,  you will see how they can work together to move a lot of water safely and quietly. This should help you choose the right method for your tank.

One thing to note — By only taking a couple paragraphs to describe each method,  a lot of stuff is skipped over. There is no way I can explain everything in detail in only one post. Single pipe methods are very easy to explain because not much is going on, but more complex 2 pipe and 3 pipe designs need their own longer guides.

“Why are standpipes used?”

Raising the inlet of a plumbing pipe inside your overflow allows you to keep the overflow full of water. If no standpipe is used then the water falling over the weir will fall a large distance and splash loudly.

The 3 basic types of pipes.

An open pipe is as simple as it gets. Water in the overflow will pass through it, but it gets loud as soon as you put even small amounts of flow through it. The echoing sound resembles a flushing toilet.

If you add even more flow, the pipe will start and purge a siphon, and the overflow will not be stable.

For this reason, people have been coming up with ways to make a drain that is both quiet and has a lot of capacity.

If the pipe is of significant diameter (1.5″ or larger) with not much flow (say under 400 GPH), then the level of noise can be acceptable on an open drain. Still, its not really a good idea to run an open drain by itself because of the lack of failsafes.

These are all single-pipe methods and a variation of the same idea. Take an open pipe, submerge the inlet opening, then vent air through the top. the result will be a more or less quiet pipe (compared to an open drain that is).

These contraptions work because the air vent prevents a siphon from starting in the pipe.

Any time a drain’s opening is submerged in an overflow box by a few inches of water, it will want to go into siphon mode. Unfortunately an unregulated siphon causes havoc as the pipe fills with water, then rapidly purges. This will go on over and over again. The water in the overflow will never be constant. Hence the reason for the air vent – to prevent a siphon from forming.

Although the hole vent is typically very small, a considerable amount of air is drawn through it. The water and air mixture that travels through the pipe down into the sump mixes together vigorously. The bubbly water dumps into the sump.

When the water exits down in the sump, even more bubbles are created. The bursting bubbles result in salt spray — and salt creep on the surrounding surfaces.

One shortfall of these vented drains is that they are only quiet when at the low end of their flow capacity. Up to about 25% of capacity, water flows down the walls of the pipe. If you could look top down into the pipe, you would still see air in the middle of it. At this point there is hardly any noise because the drain isn’t drawing in any air down the pipe yet.

Once you increase the flow of water past this point, the drain begins to draw in a considerable amount of air. The air and water mixture becomes very turbulent inside the pipe. It starts to make more noise as flow is increased.

For this reason, large plumbing diameters (1.5″ and up) need to be used in order to keep the pipes running quietly. This is usually not an option on many smaller tanks.

The Durso is very simple and it was implemented in many commercial “reef ready” tanks. They are still very common despite the fact that they have no safety backup and are typically loud. Still, some people prefer them as they don’t mind the noise and extra aeration they provide.

Many people convert these types of single drain systems into siphon valve based overflow methods like the Herbie (2 pipe) or Bean (3 pipe) design to get more capacity and take advantage of the other benefits of a siphon system.

Siphons are silent when running and have much more capacity and safety measures than a Durso or vented drain. They also produce no bubbles. A valve placed under the drain line’s bulkhead is how the siphon is adjusted.

Any time you run a siphon pipe you must use an secondary emergency pipe. 2 pipes must exist separately. You are purposely constricting the flow of the drain with a siphon valve, so the emergency line must be present for a safe system.

A two pipe design, consisting of a valve-controlled siphon drain and an emergency line next to it. The siphon pipe has a valve on it — allowing for it to be balanced against the rate of flow from the return pump. This creates a consistent resting water level in the overflow.

With the correct height of the standpipes and a submerged outlet, the siphon will reliably re-start when the return pump loses power, and then starts pumping again. No manual adjustment is needed.

The emergency drain’s primary purpose is to take on water if the siphon drain is clogged  Many people also allow a small amount of water to trickle into the emergency line to reduce the amount of periodic manual adjustments needed on the siphon valve. Running a trickle down the E-drain is controversial but nonetheless widely practiced.

The Herbie method is a common way to quiet down an existing overflow box with 2 standpipes present. Many times an existing return line is converted into a drain line, then the return is plumbed over the back of the aquarium.

For more info Check out this page: Herbie Overflow Guide 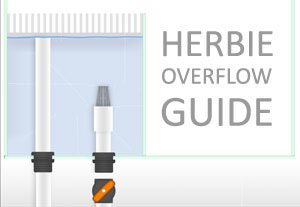 A 3 drain overflow is often referred to as a Bean Overflow. It is widely considered the best overflow method. The original Bean design refers to a specific implementation — a coast to coast overflow with a relatively shallow box containing the pipes.

The Bean design uses the same valve-controlled siphon drain as the Herbie setup. That is where the similarities end.

The second pipe acts very similar to a Durso because it is vented with an air hole — preventing that pipe from being a siphon and making it quiet. It is commonly referred to as the “open channel”.

This makes it easier to operate because you don’t have to adjust the siphon nearly as much. Small variations in flow are taken up by the open channel drain.

By adding a third pipe — a dry emergency drain — safety is increased. The system also gains capacity because unlike the Herbie, the open channel can take in more water than just a trickle.

Because a dry emergency line is always there, there is an extra safety measure in place. For this reason it is common to see siphon inlets with no strainer (a must with a Herbie) and toothless overflow weirs being used with the Bean system.

In the last few years there have been a few companies making external overflow boxes out of acrylic that use a 3 standpipe overflow design. They can be installed by drilling a few holes in the tank. An external box housing the pipes is connected to a smaller overflow weir box inside of the tank with bulkheads. Two such models of these boxes are the Reef Savvy Ghost Overflow and the Synergy Reef overflow. These go for about $200 USD.

Risky and Not Recommended Methods

In their own category, these were created in order to get water down to the sump from tank without having to drill it. They utilize a siphon to pull water up and over the lip of the tank and hang on the trim.

Overflow boxes are fundamentally flawed in that they rely on a siphon with no backup. Because a siphon’s action can stop, there isn’t a reliable way to ensure that the tank wont overflow from the return pump. The pump runs 24 hours a day and the water needs somewhere to go.

Some models will employ a pump to constantly provide negative pressure to the pipe that carries the water. The idea is it will quickly restart a siphon when power to the return pump is stopped and then re-started. Unfortunately these pumps are often in the 20 dollar range – not having your tank overflow is too big of a responsibility to put in the hands of a cheap pump.

These contraptions have so little capacity and complete lack of any type of failsafe that they do not worth mention. A flood waiting to happen. 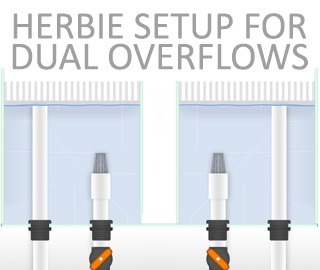